Jun 23 Comments Off on Barrett’s Esophagitis: A Condition Caused by GERD

GERD and its Impact on the Esophagus

As we shared in other posts, GERD (short for “gastroesophageal reflux disease”) is the culprit in creating heartburn, the painful burning sensation felt in the throat and chest after eating certain foods.  It is estimated that approximately seven million people in the United States, from adults to infants, suffer from the symptoms of GERD at some point in their lives. For many people, the affects of GERD are felt only occasionally such as after a very large meal (think Thanksgiving). But for some who suffer from heartburn on a regular basis, GERD can cause other conditions if left untreated. One such condition this post will discuss is Barrett’s Esophagitis.

How Barrett’s Esophagitis is Detected

In many cases, Barrett’s Esophagitis is detected during routine diagnostic evaluation for GERD via an upper endoscopy. During this minimally invasive procedure, a small flexible tube with a video camera is used so the surgeon can perform a visual analysis of the affected area.   In a healthy esophagus, the lining is pink and uniform in color. With an esophagus affected by Barrett’s Esophagitis, the lining appears uneven in color and pattern, as seen in this side by side comparison: 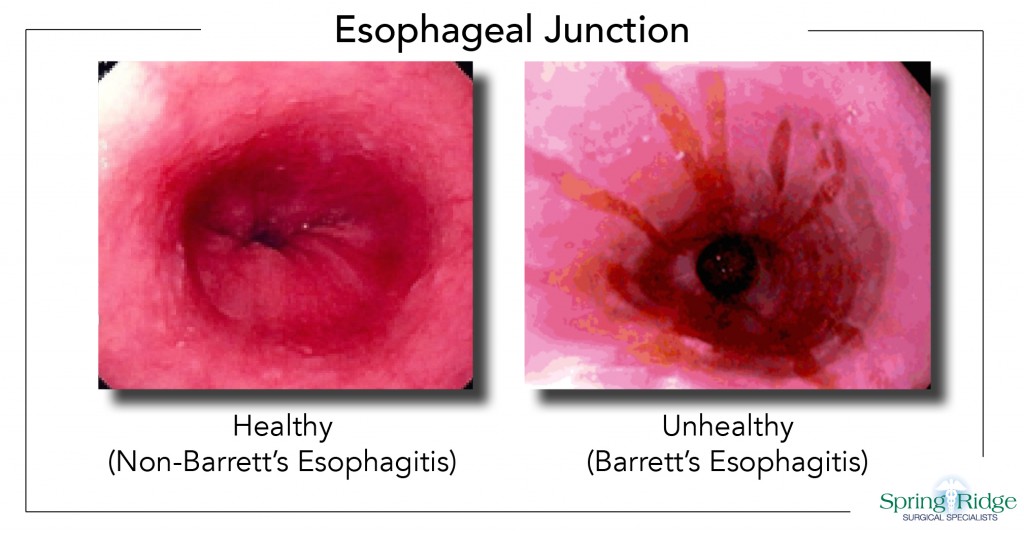 If Barrett’s Esophagitis is present, your surgeon may need to perform additional testing such as biopsies to detect the presence of pre-cancerous or cancerous cells within the esophagus.

Your surgeon will keep track of any changes in your esophagus through regular testing. The good news is that controlling the symptoms and potential esophageal damage from GERD is often achievable with lifestyle changes your surgeon can suggest specifically for your condition. These can include losing weight, avoiding smoking and alcohol, and eliminating greasy and high-fat foods that create reflux.